Article in the Wiesbadener Kurier


Brigitta Lamparth writes in the Wiesbadener Kurier about Erika Davis-Klemm's plans for 2016. The DavisKlemmGallery will be moving into a new location. The opening is planned for fall 2016. Until then, a series of "virtual exhibitions" will be shown on the homepage of the gallery - starting off with the history of the spray banana by Thomas Baumgärtel . More here. 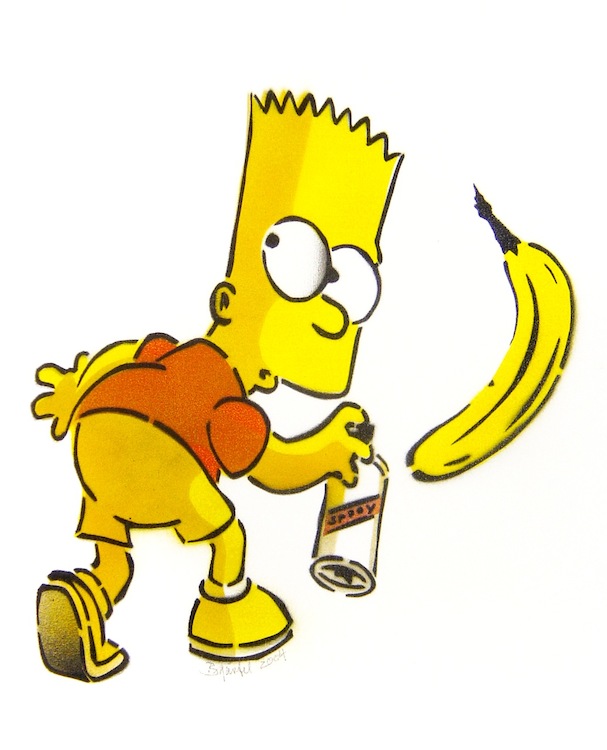 New graffito by Baumgärtel in Sulzburg


Thomas Baumgärtel, also known as "the banana sprayer", sprayed a peace banana in the French national colors in Sulzburg, not far from the French border. He created his "peace banana" as a metamorphosis of his spray banana over 20 years ago, however, only in the classic colors yellow and black. In January he had reacted to the terrorist attacks at the offices of the satirical magazine Charlie Hebdo with a new metamophosis. The new peace banana is his latest reaction to terrorist attacks on freedom. 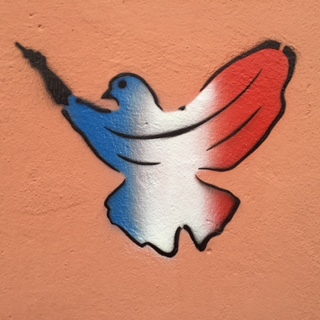 
Steve Johnson will be giving a talk and slide presentation on architecture as metaphor in visual art on November 20th at 7:30 pm at C&C Gallery in London. For more information, clicke here. 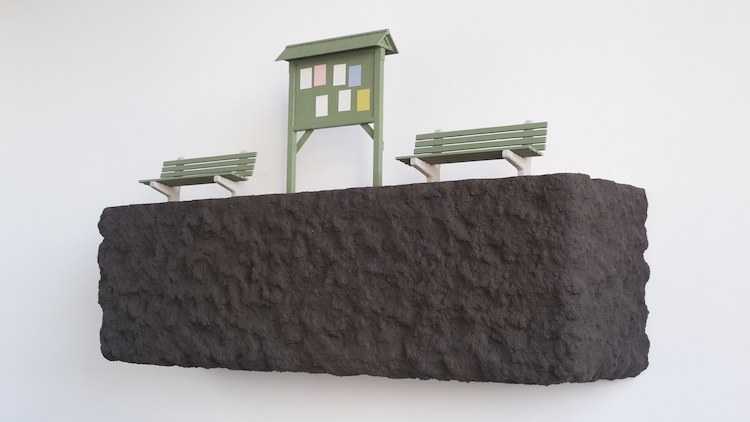 
An exhibition at the Landesmuseum for art and cultural history Oldenburg is examining the 1970's  - a decade that brought us Abba, loud wallpaper prints and plattform shoes as well as the taking of hostages at the Munich Games and kidnappings by the Red Army Fraction. Here is a link to an article - including art by Werner Berges - about the exhibition, published in the Süddeutsche Zeitung and written by Till Briegleb. 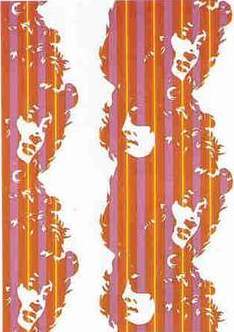 Not slowing down at 88


Here is an informative article and video from PBS about Alex Katz, who turned 88 this year. The artist looks back at six decades of work with humor and the charming self-confidence of knowing that "in a sense, the world has caught up with me."
In Europe, the exhibition "Alex.Katz, This is Now" can be seen at the Guggenheim Museum Bilbao (runs till February 7th, 2016).
Link to PBS article. 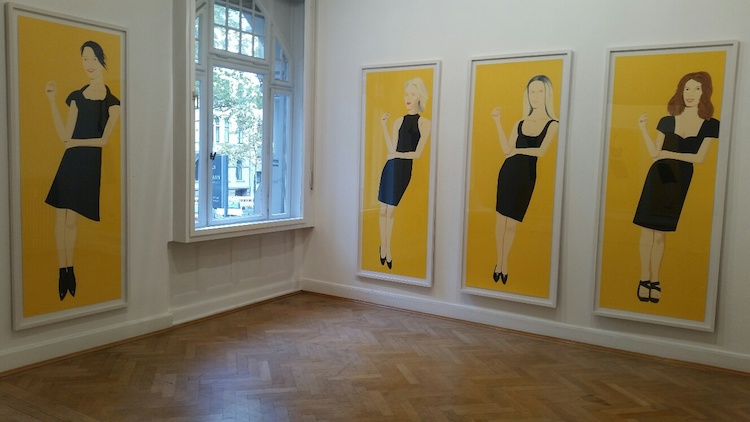 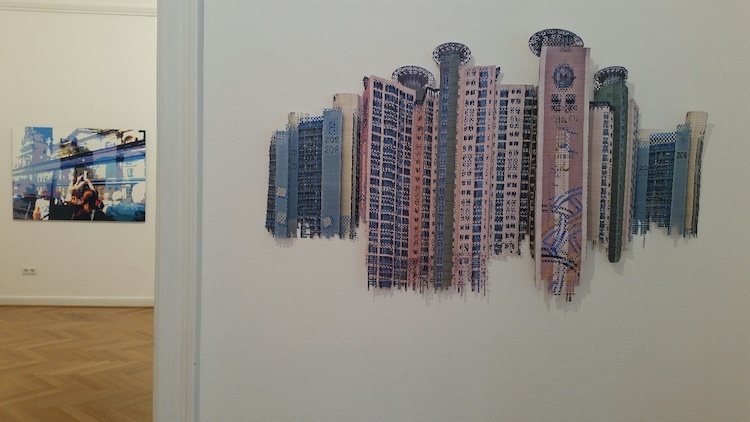 
Thomas Baumgärtel's spray banana makes the first page of the FAZ issue on October 2nd, 2015. On the occasion of the 25th anniversary of Germany's reunification Jasper von Altenbockum writes an article about the symbolism of the banana and Baumgärtel's art. Whether it is the "fruit of reunification" of a banana republic or simply "something crooked" - Baumgärtel has been proving the transformability of the banana for over 25 years. Read more here. 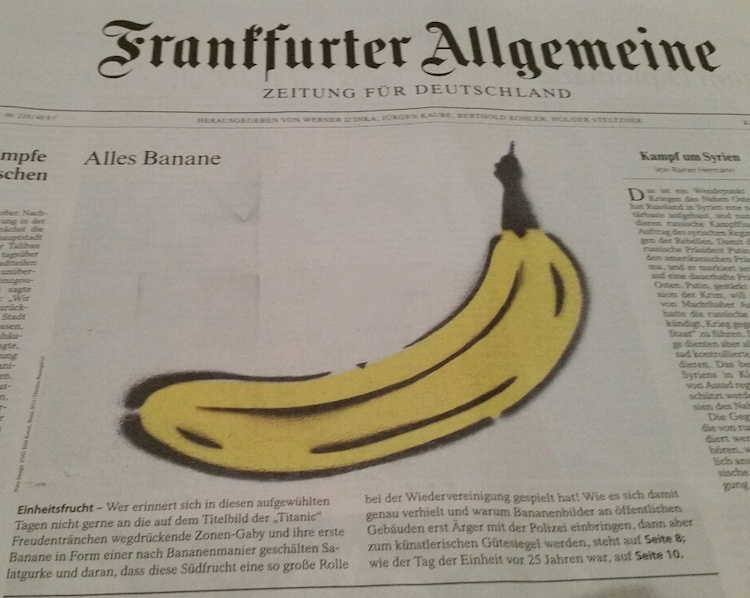 
On September 27th, 5:00 pm, an artist talk with our artist Barbara Storck-Brundrett will take place at the Künstlerverein Walkmühle in Wiesbaden. 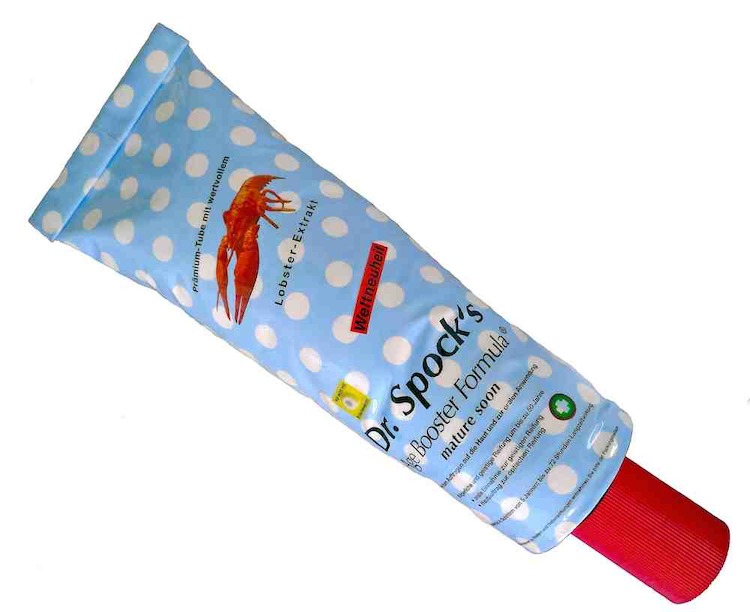 
Our artist Barbara Storck-Brundrett has created three new "tubes" with problem-solving content for the group exhibition "about being young and old" at the Künstlerverein Walkmühle in Wiesbaden. The exhibition will open September 18th and can be seen thru October 18th, 2015. For more, please read here. 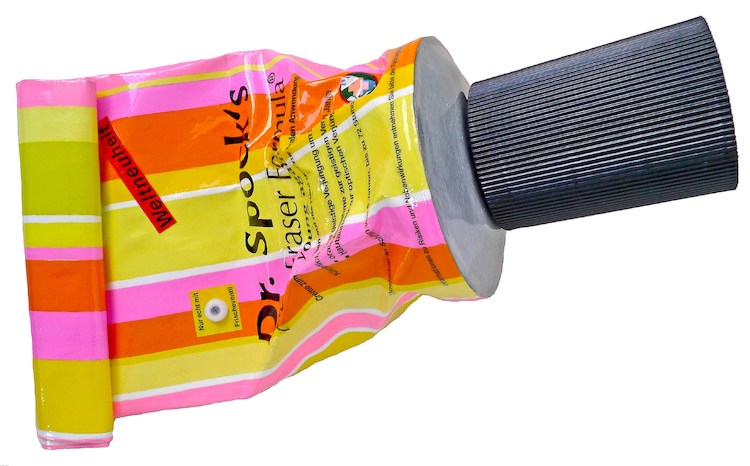 
From September 6th thru October 4th the exhibition "Orstumgehung" can be seen in Baruth, not far from Berlin. The Kunstverein invited artists to create work for this open air exhibition situated on a bypass road that is no longer open for traffic. Our artist Steve Johnson, London, made a kind of "community announcement board". These still can be found in smaller German villages, but with less profound statements. 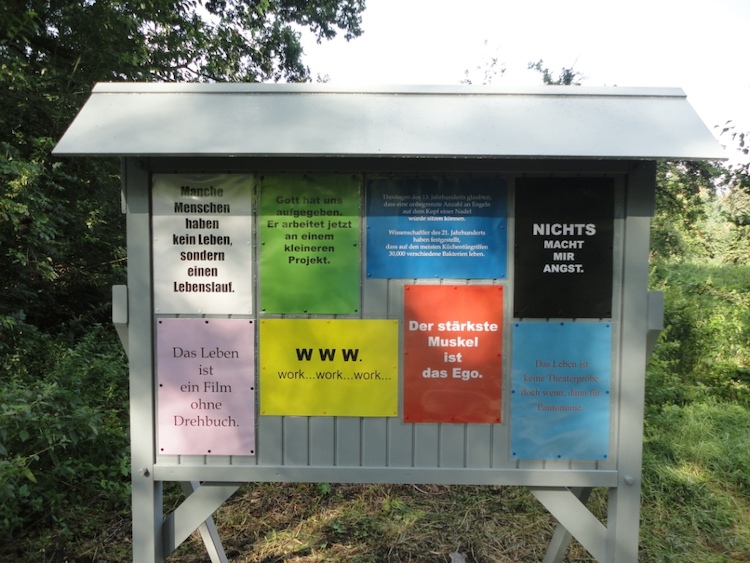 
We wish Mel Ramos all the best on his 80th birthday today! 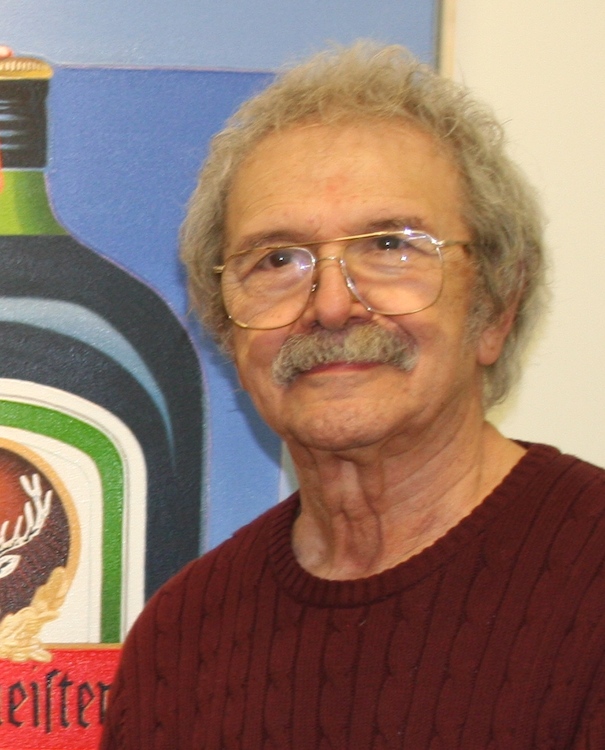 
From June 13th thru 21st, 2015 the exhibition "Bilder im Schloss" (= pictures in the castle) with works by Werner Berges can be seen at Castle Sulzburg (between Freiburg and Basel). The opening is on June 12th, 2015, 6 pm, an artist's talk on June 14th, 2015, 4 pm. More information on the attached pdf (for English version please contact us). 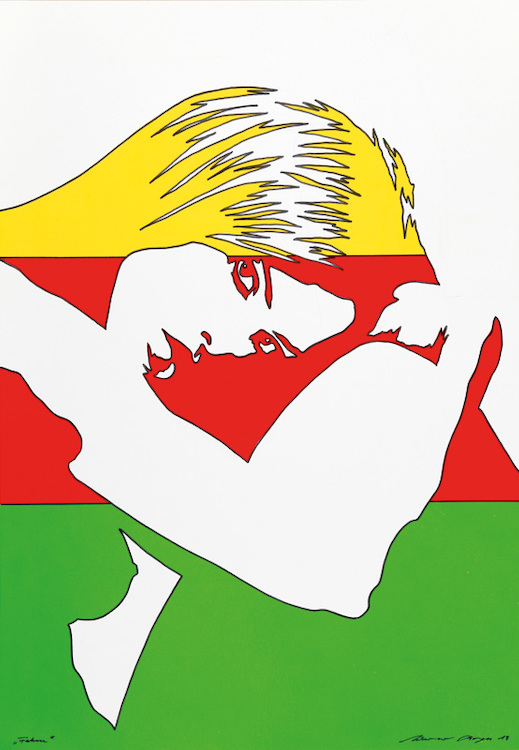 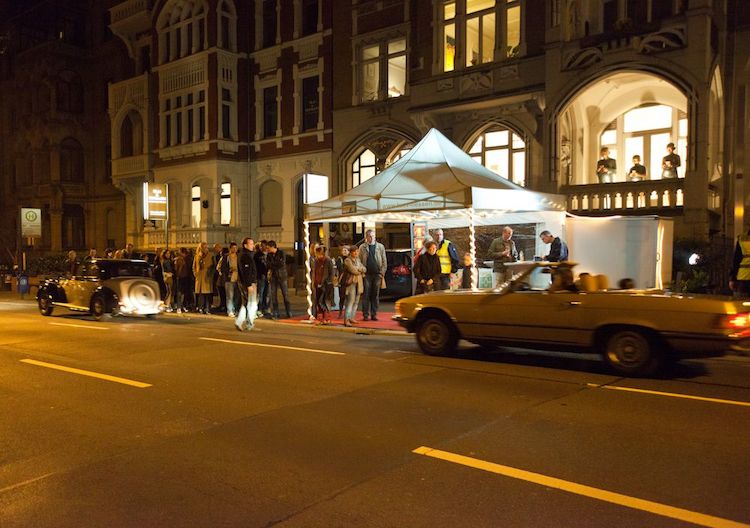 
From May 9th thru June 6th, 2015 works by Christo & Jeanne-Claude and Wolfgang Volz can be seen at the Neuffer-Kunsthalle in Pirmasens. The exhibition will include several of the projects from the past decades as well as projects to come, such as "Over the River, Project for the Arkansas River". 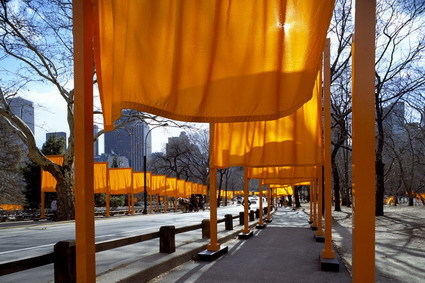 
The exhibition "kopfüber" (i.e. upside-down) with works by Dirk Brömmel can be seen from April 26th thru October 25th, 2015 at the Museum for Inland Navigation in Duisburg, Germany.

Artist Talk with Marion Eichmann in Darmstadt on May 8th, 2015


On May 8th, 2015 from 6:00 - 7:00 pm Marion Eichmann will talk to Klaus-D. Pohl from the Hessisches Landesmuseum Darmstadt at the gallery of the Schader Foundation in Darmstadt aboout her art. The artist talk takes place within the framework of the exhibition "Artist/Tourist: Urban Views" with works by Marion Eichmann and Timo Klein, April 17th - September 6th, 2015. 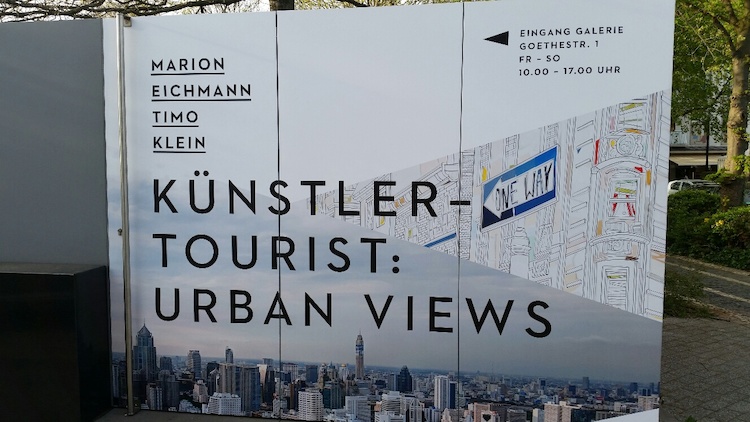 
The traditional "short night of galleries and museums" in Wiesbaden will take place on April 11th, 2015 from 7 pm till midnight. More infos: see kurze-nacht. 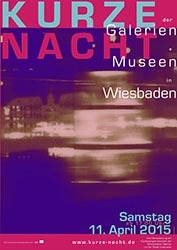 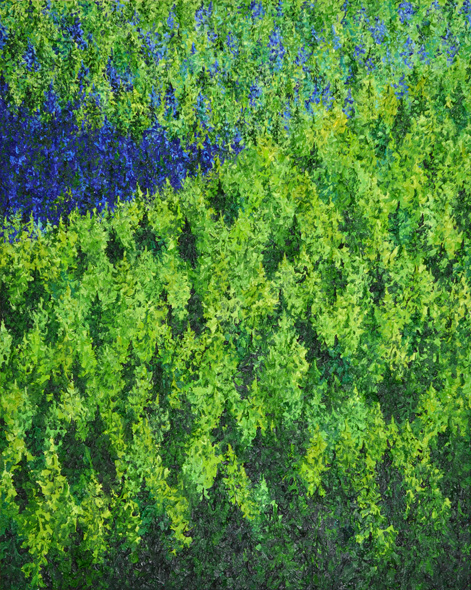 
An exhibition with original prints by Mel Ramos will be shown at Ludwig Museum in Koblenz March 22nd thru May 17th, 2015. The show will be enhanced by sculptures, drawings and paintings by the Californian artist, who belongs to the first generation of American Pop artists.
n-tv will be showing a film accompanying the exhibition on April 3rd at 6:30 pm. It will be repeated on April 4th at 9:10 am and on April 5th at 7:05 am. 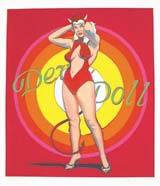 
Works by Marion Eichmann and Timo Klein can be seen at the Schader-Stiftung in Darmstadt April 17th thru September 6th, 2015. The exhibition (in cooperation with the Hesse Landesmuseum) explores the artist-as-tourist view of urban life. 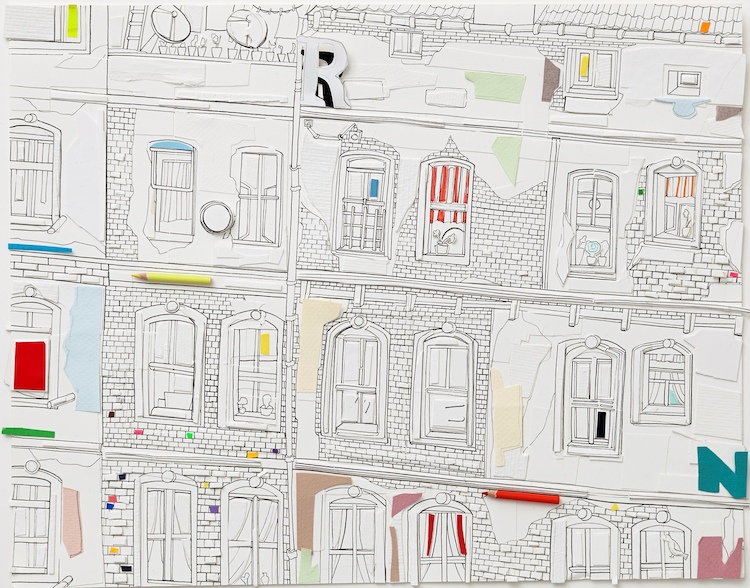 
"Slowing down in fast times": that is how the Wiener Zeitung describes in an article worth reading Konrad Winter's painting technique with automotive paint on aluminium. Our artist Konrad Winter has an exhibition at Galerie Frey in Vienna. 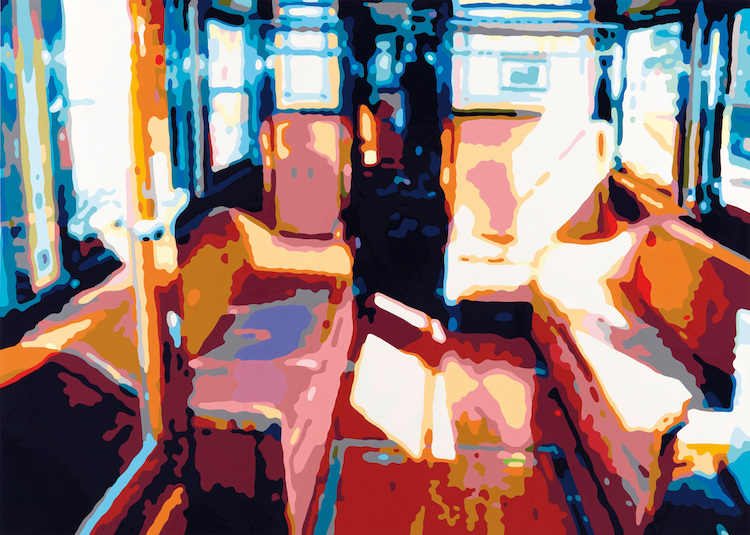 
"Discovery of the century" in Aschaffenburg


The Neuer Kunstverein Aschaffenburg e.V. is opening its next exhibition on March 14th, 2015 at 6 pm. The concept artists Uta Belina Waeger and Bruno K. are staging a special show - including an excavation at the site of the Kunstverein. Guest artist: Dieter Renk. The exhibition runs March 15th thru May 3rd, 2015. 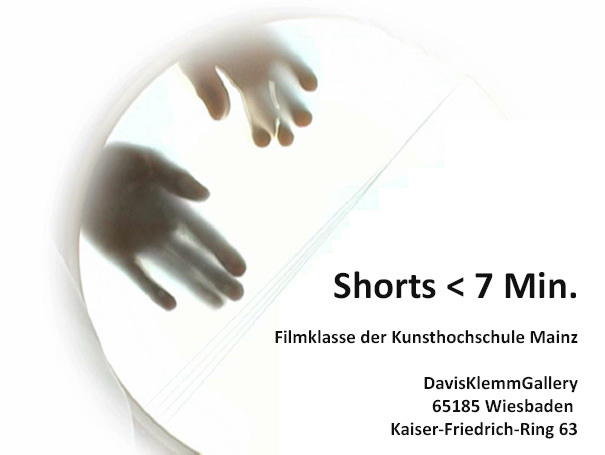